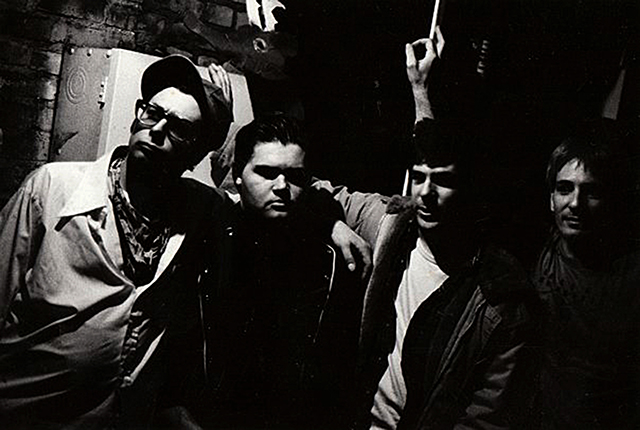 All Stick Men With Ray Guns albums are currently are available for purchase on Amazon, Apple Music, and wherever fine digital downloads are available for purchase. We also have a very limited supply of vinyl LPs of Grave City (with maybe a few copies left in blue vinyl), 1,000 Lives to Die, and Property of Jesus Christ. There is also an extremely mimted number of original factory sealed copies of the 2002 CD release Some People Deserve to Suffer. Email: SMWRG bassist Bobby Beeman for current availability and prices. Here is the direct link to the official Stick Men With Ray Guns website.

Stick Men With Ray Guns (SMWRG) formed in Dallas, Texas, in the spring of 1981 with me on guitar (ex-Nervebreakers & Bag of Wire), Bobby Soxx on vocals (ex-Teenage Queers & the Enemy) and Ft. Worth drummer Scott Elam. Quad Pi bassist Mark Ridlen lent his services, playing the first shows until a permanent bass player could be found. Bobby Beeman was soon added on bass. He was perfect in every way.

Shows were unpredictable, often incorporating odd or obnoxious multimedia stage introductions with intentionally irritating stage lighting, and we were very, very loud. As the band action-painted the room with a howling din, Bobby played the leering, raving idiot on stage, making fun of himself and anything that caught his attention. The intent was to create a hostile, uncomfortable environment that was always teetering on the edge, just out of control. It succeeded.

Bobby Soxx wrote the very best lyrics; read them. They are nothing less than art. Grave City, Christian Rat Attack and What Am I? are masterpieces. He was also incredibly funny, often making it hard to play because we were laughing so hard. He was the consummate professional, always showing up for rehearsals and shows. Although Bobby was well known for abusing drugs, after 1987 alcohol seemed to take over and began to do untold damage. Bobby died in Dallas of liver failure on October 22, 2000. Sadly, for the last years of his life there wasn’t so much of Bobby left in there. I miss the old Bobby very much. Please don’t let alcohol kill you, too.

The volatile mix of strong personalities did not lend itself to going on the road for more than a few days at a time. SMWRG was content just to play the Texas punk club scene, a Church of the Subgenius convention and headlining both the the Houston leg of the Rock Against Reagan tour AND the Rock For Reagan show sponsored by the RNC during the 1984 Republican National Convention in Dallas. We played clubs in Dallas, Ft. Worth, Austin, Houston, and San Antonio, sharing stages with bands such as X, Dead Kennedys, TSOL, The Misfits, Bad Brains, UK Subs, and the Butthole Surfers many times.

We were under no illusions about our commercial potential when we started the band. Possibly because I was older than most others on the scene, I never looked at SMWRG as a career, and frankly Bobby’s personal problems were so severe that we couldn’t seriously consider touring. As it was we could barely spend a few hours together at any one time. Oddly enough, it actually made all our decisions easier because we never had to make any of the difficult creative compromises that bands are often forced to make.

After eight years together, starting in the fall of 1988 we got as far away from each other as possible in the contiguous United States.

Sadly, in the fall of 2000, reports of Bobby’s bad health turned out to be worse than we had feared. After being found unconscious by his girlfriend and fiance Sunny Delipsey on October 22, Bobby Glenn Calverly, aka Bobby Soxx, died of liver failure at Baylor University Medical Center in Dallas. They had planned to marry on December 29th. He had been diagnosed with cirrhosis of the liver as well as hepatitis A and C. Bobby had been living in a trailer behind the home of his friend Paul Kulcsar since mid-summer. He had been in good spirits and had been trying to return to making music with the help of Paul and various friends.

A wake was held at Charlie Gilder’s Bar of Soap on November 5, 2000. Charlie, Paul, Bob Beeman and I were joined by local musicians and friends, too many to list here. The crowd paid their respects to Bobby’s uncle and two aunts who had graciously agreed to attend. We all miss him very much. 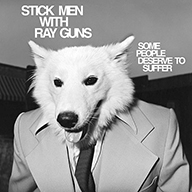 Some People Deserve to Suffer – This album is currently available at the following links and wherever digital music is sold worldwide.

NOTE: WE HAVE AN EXTREMELY LIMITED SUPPLY OF ORIGINAL FACTORY SEALED CDs AVAILABLE FOR PURCHASE TO COLLECTORS. Email Clarke Blacker for CD prices and availability. 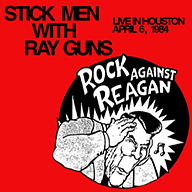 Rock Against Reagan – This is the complete show from the 1984 Rock Against Reagan Tour recorded live at the Lawnville Annex in Houston on April 6, 1984. – This album is currently available at the following links and wherever digital music is sold worldwide. Amazon Apple Music 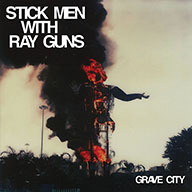 Grave City – This album is made up of every studio recording the band ever made, plus a few live tracks recorded for the Live at the Hot Klub album. This album is currently available at the following links and wherever digital music is sold worldwide. Amazon Apple Music 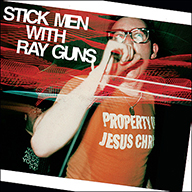 Property of Jesus Christ – This album is the Rock Against Reagan show at the Lawnville Annex in Houston, Texas on April 6, 1984, remastered and edited for release on vinyl LP.

We also have a limited supply of vinyl LPs of Property of Jesus Christ. Email: SMWRG bassist Bobby Beeman for current availability and prices.

This album is currently available at the following links and wherever digital music is sold worldwide. Amazon Apple Music.

1,000 Lives to Die – This recording was originally intended to be a single disc of a double live album recorded with the Butthole Surfers, this album was recorded live at the Theater Gallery in Dallas, Texas on January 31, 1987. Unfortunately, technical problems with the rocording of both bands prevented the album's release as had been planned. The SMWRG tape was restored by Jack Control at Enormous Door Mastering in Austin, Texas This show is also sometimes known as The Last Waltz because Stick Men had decided to take a break, and this would be our last show of about a year when we would reform to work on new material in January 1988. An expanded version of this album may be released at a future date.

We also have a limited supply of vinyl LPs of 1,000 Lives to Die. Email: SMWRG bassist Bobby Beeman for current availability and prices.

This album is currently available at the following links and wherever digital music is sold worldwide. Amazon Apple Music.