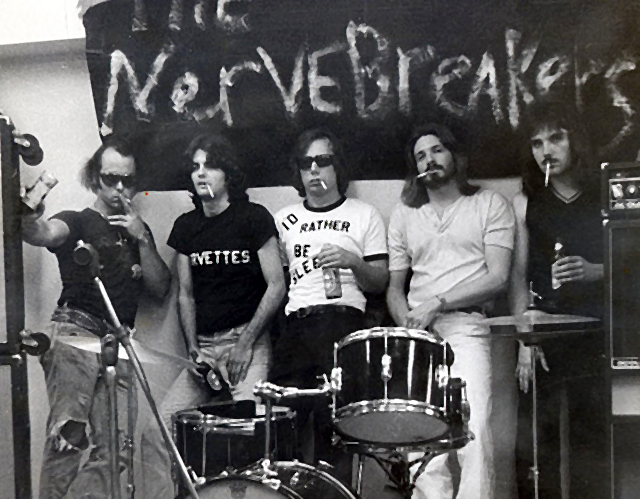 In the early spring of 1977, after seeing my friend Mike Haskins' band The Nervebreakers play in a local club. I was so impressed with The Nervebreakers that I became an instant fan and later replaced Pierre Thompson on bass who had quit soon after that show, despite the fact that I was a guitarist, I offered to sit in on bass and eventually joined the band.

The Nervebreakers brand of guitar-based rock had influences ranging from the Troggs to Captain Beefheart. The band's real strength was in the extent and diversity of its influences. Nervebreakers Politics EPThe writing team of Mike Haskins and Thom Edwards produced many fine examples of powerful and intelligent songwriting coupled with strong melodic hooks, guitarist Barry Kooda showed exceptional talent for writing and performing witty power pop, and drummer Carl Giesecke was responsible for one of their best known songs, “My Girlfriend is a Rock”. an infectious power pop hit which appeared on the "Politics" EP.

The next year was a dizzying rush as the punk scene began to explode. Pressure began to build as the clash between the established music scene and the next music began to heat up the club scene. Shows were often difficult, and the less than appreciative audiences at some clubs could become violent.

The Nervebreakers often played to only one or two paying customers. Because of a lack of club support, we began to put on our own shows, usually with the Dallas band The Toys. In the summer of 1977 we played a show with the Ramones sponsored by a local radio station and the reception was good.

When we heard that the Sex Pistols were going to play Dallas on their US tour we managed to talk our way onto the bill. The climate in Dallas was very tense. The local radio stations were whipping up rednecks by hosting call-in shows where people could call and say why the Sex Pistols shouldn't be allowed to play in Dallas. Bowing to family pressures, I left the band a few weeks after.

I have continued to work with the band over the years, primarily creating graphics for albums. I recently finished the cover and label art for their newest soon to be released album The Nervebreakers Face Up to Reality.